by Leo Bonomo | May 23, 2019 | mediumshipandlifeafterdeath, Sceptics and cold reading, Uncategorized

It was my great pleasure to interview Rev Lyn Gibb De Swarte for Paranormal Daily News, another magazine that I write for (I also write for Psychic World newspaper) amongst others.

It was a most enlightening experience for me especially as Harry Houdini was mentioned. And, especially as the event mentioned was videoed for posterity and the connection from spirit was from Harry Houdini himself. He can through the mediumship of Lyn whose guide is the very well known Doris Stokes. Harry gave his real to Lyn, it is “Ehrich” pronounced Eric. His real surname name is Weiss. Lyn had started her own “New Christian Spiritualist Society” and is a published Author in her own right. Her Excellent book which I have read is called “The Spiritualists’ Handbook” is “A concise and extensive guide to Spiritualism and all its practices” It is extremely thorough and a must have on the shelf if you are in anyway interested in or connected to, Spiritualism in any way. Please look at the interview.

Lyn has lead a remarkable life so far and been very successful in whichever direction she has chosen to go in, from ice skater to editor and of course medium. The video  has never seen the light of day. I think it is because it is so damning proving that the greatest escape artist of all Harry Houdini, who did give proof positive to his wife, Beatrice, that he had survived so called death or as Harry himself put it, “If anyone can escape death, then Houdini can” I do paraphrase there of course.

Between Harry’s wife, Beatrice having been extensively harassed by sceptics mercilessly into redacting what sign Harry had given her and finally confirming that she permanently retracted the former statement and this final proof from the seance, that of course sceptics successfully have hidden or perhaps destroyed the film evidence of that most important event.

Given by Arthur Ford Medium:

“For many years,” said Houdini’s mother, “my son waited for one word which I was to send back. He always said that if he could get it he would believe. Conditions have now developed in the family which make it necessary for me to get my code word through before he can give his wife the code he arranged with her. If the family acts upon my code word he will be free and able to speak for himself. Mine is the word ‘FORGIVE!’ Capitalize that and put it in quotation marks. His wife knew the word and no one else in all the world knew it. Ask her if the word which I tried to get back all these years is not ‘FORGIVE!’ I tried innumerable times to say it to him. Now that he is here with me I am able to get it through. Tonight I give it to you, and Beatrice Houdini will declare it to be true.” 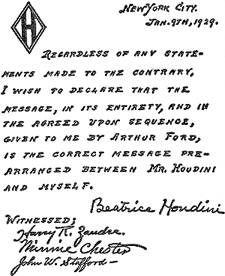 You will no doubt be interested to know what this code Houdini was to give to Beatrice. It was given over several months, over several different sittings. Again this would prove that with several seances, and none knowing what the individual words would mean in themselves or in total. It must of course be such a code that could not be guessed or be so general as to be usesless. This is the code:
“ROSABELLE ** ANSWER TELL ** PRAY ** ANSWER ** LOOK ** TELL ANSWER ** ANSWER ** TEL. “He wants this message signed in ink by each one present. He says the code is known only to him and to his wife, and that no one on earth but those two know it.

It is forever a wonderment to me that such wonderful news such as the survival of death needs to be hidden. That of course is a matter of control by the governments of the world. God forbid, (no pun intended) that man understand his destiny, that we live our lives without fear and move into a wonderful future without war mongers, and the very few privileged that today control our world.

To have this knowledge is liberating in so many ways and is the exact reason why the privileged few, The governments, Religions, some scientists and sceptics are so, so fearful of its proof.

The world is changing now so fast. Sceptics are quieter because of the huge amount of proof through mediumship, and notably, Quantum Physics and the fact that this subject partly through sceptics help in so successfully bring this to the public attention and the huge, spectacular backfiring of that long series of events that strangely, we must in a small way thank them (sceptics) for it.

I think this is the first time Have actively thanked sceptics.